This Old House Magazine Cover…Yes ME! 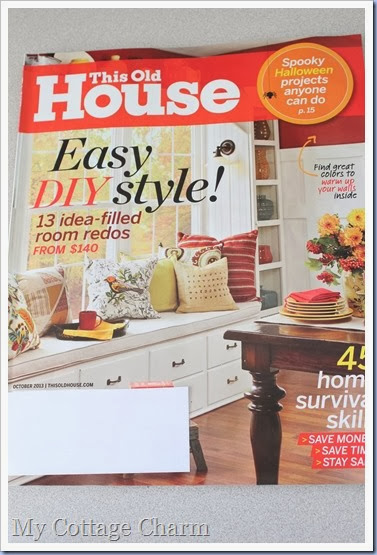 Could someone pinch me please?! :0)

You guys remember a while back when I said I had a HUGE announcement? Well this was it, and I’ve had to keep it a secret since JULY!!   (I thought I would explode!!)  The window seat that I built, is on the COVER of the October issue of This Old House Magazine, and there’s a featured article on page 92 AND 93!!  Gah! 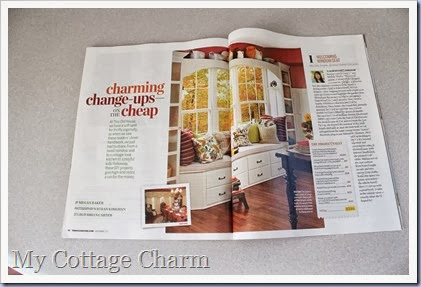 I have known since July that my window seat was going to be in the magazine, but I didn’t know until a while later it was up for the cover!  It was between me and three other people, and I’m very humbled to say mine made it….blessed I tell ya!   I only found out last week that it made the cover, so this is all crazy new and exciting! (and I think I squealed out loud when the note came in the mail that mine was going to be on the cover!) 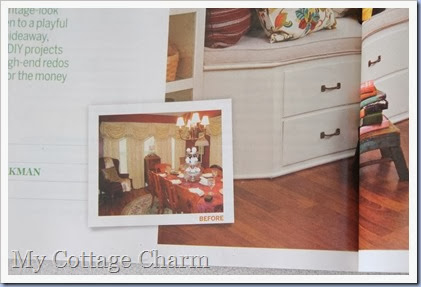 I didn’t know until the end of the day of shooting that they were going to put a picture of me in the magazine too….I barely have on any make-up!! I was very happy when they said the picture was going to itty bitty! :0) 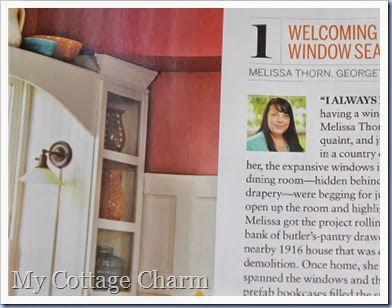 I have been curled up on my window seat much of the afternoon reading and re-reading the article!  I’m so honored and excited all rolled up into one. 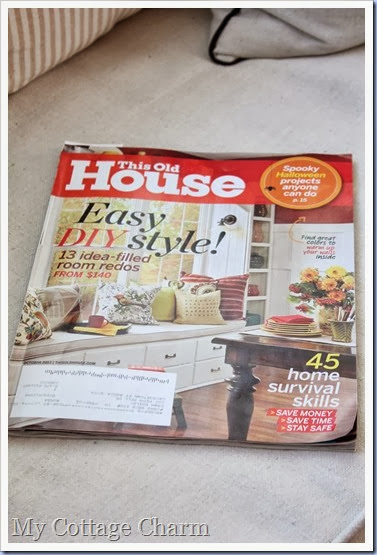 I’ll do a post soon on the behind the scenes pics I took and introduce you to some really nice people that helped make that cover happen…great folks!

OH..if you want a copy of the magazine, you can get them at Lowes! Our Lowes hadn’t gotten them on the stands yet, but it’s the October issue to it should be out there anytime now.

Oh look! I'm the first commenter... Congratulations, my dear friend!! I am so proud of you!!! Thank you for sharing the news with me... I was so excited for you that I thought I was going to pop!!

Just think!! I know a STAR!! A magazIne STAR. As I was reading I was smiling in happiness for you. Congratulations!♥♫

I am so blessed and proud to say you are my best friend! You are so talented and a truly special girl. No one deserves it more!!! congrats

Oh my goodness...Congratulations!!! That is so exciting!

I am so excited for you, Missy! You are one of the nicest and most creative people around and this project is SO awesome! I can not wait to see this magazine!!

What an AMAZING accomplishment! Congrats Missy! The cover is truly such an honour... in which you deserve!

Congratulations! Your window seat is absolutely beautiful. Can't wait to buy the magazine.

AAAAAAUUUUUUUUGGGGGGHHHHHH!!!!!!! THIS IS SO CRAZY EXCITING!!!!!!! You cannot imagine how excited I am for you, Missy!!! But, then when I found your blog 3 years ago, I KNEW it was a one of a kind blog and YOU are one CRAZY TALENTED woman!!!!! This couldn't happen to a better person!!! (I can't believe it's actually been three years that I have been a fan of yours....but I looked to see how long it has been, and it was when you revealed your kitchen....I had just done my backsplash with the SAME backsplash from Lowes!) BIG HUGE HUGS AND 100 PATS ON THE BACK, GIRL! You deserve this!

Oh, Missy! Congratulations! This is fantastic! I know you must be so proud.... but you did do an amazing job on your built-in, so I am not surprised at all! Bask in the glory, my friend... you certainly deserve all the accolades!

all.that.hard.work. IT paid off! I've loved your window seat ever since you showed it to us. It's beautiful on the cover of the magazine!! And you look so pretty and happy! :)

I can't wait to read it and hear all about the behind the scenes. I'm so excited/happy/thrilled for you Missy! Wow, the COVER! :) I can say "I knew you when"....hahaha
gail

This was a great project!

I am a new reader. I just saw your window seat in the magazine and did some savvy Internet stalking to find you. Totally wanted to find it to pin from the original source

Congrats on the cover. It's well deserved. Love the entire space.

Congratulations Missy! This is awesome, and so well-deserved!

Traci@ Beneath My Heart said...

Congratulations!!! I'm so excited for you! That's a HUGE deal!!!!

Feel that?! It was me pinching you! How exciting is this? So happy when my friends creativity and hard work is recognized and appreciated!
Congrats!

Linda @ it all started with paint said...

Yes, you beat me out for the cover!!! LOL! And you know what, I would've selected your project over mine as well. Seriously! It's not just beautiful but the way you built is AMAZING!!! I was so thrilled when my issue landed in my mail box and I saw that stunning cover. Perfection!

Congratulations!! And it looks beautiful!
Patty at Home and Lifestyle Design

wow, that is so cool! What an honor! You should be very proud of yourself!!

I had to rush over from the magazine and tell you how amazing your project is! I just love everything about it! Your view is so gorgeous!! I am also obsessed with a good number of the pillows on the cover. Any chance you know any of the sources? Can't wait to explore more of your blog...that should keep me busy for a while! Congratulations!

Congratulations!! A well deserved honor for all the hard work you did in creating a beautiful window seat area!!

Amazing! This Old House is one of our favorite magazines! Congrats!!!

Super awesome! Congrats!! I checked out your build of the seat, you are amazing!! Gail from My Repurposed Life sent me over! I am a new follower!

Congratulations! It was an amazing project!

Congratulations on your well deserved feature and the cover too! I know how exciting this is. Saw you over on Itsy Bits and Pieces. Great job.

OH MY GOSH! There you are right on the cover, and it looks so pretty! How exciting! I bet you are about to bust... that is really really cool. Oh wow. I will totally watch for the magazine and buy it as soon as i see it. I can't wait to read what they say and see all the pics. I can't believe you made the cover... that's crazy cool!

That is so amazing, Missy. You deserve to be so proud. Will there be enough TOH magazines left on newsstands around this area for the rest of us to get one, or will you have bought them all up? Ha ha. My FIL is a subscriber, and I read his when I go over to his house, so I'll be sure to let him know that I met the person whose home is featured on the cover!

Mrs. Jones from the Circus said...

Ack! That's so cool!!!
When I was reading my magazine, I gravitated the the "before" picture first. I thought 'I know that room...'.
Congratulations!!!!

Oh my dear sweet friend this was SO well deserved! You are so clever and creative. Not to mention you have perfect timing. Your beautiful card arrived on my sons birthday.:) Thank you SO much!

I subscribe to TOH and just read about this! How fabulous! Congratulations! I love the window seat. You give me hope I can do this :-)