How to Make Pickles 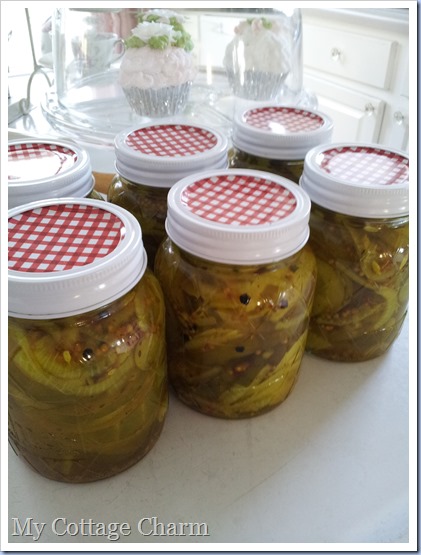 I remember when I was growing up I would watch my mom and my grandma in the kitchen canning all the wonderful things they had grown in their gardens.  One year my mom and dad let me have my own garden….I raised all kinds of things! Mom told me my garden actually did better than theirs that year! :0) The one specific thing I remember about my garden that year was raising spaghetti squash, I thought that was the coolest stuff ever! I raise a garden of my own now that I’m an adult….it’s not HUGE like the ones they used to raise, just a couple of raised beds, but it yields quite a bit! This year I had an abundance of cucumbers, so I made the same pickles my grandma used to make….heck, she still makes them! She still has a garden too, and she’s in her 80’s!!
They’re called…. 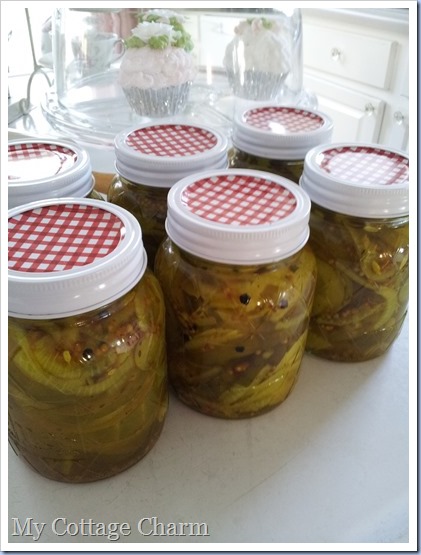 One thing you need to know, and this is important!  The turmeric  stains everything! Put down towels on your counter where you’re working and expect them to have yellow rings when you’re through. Also wipe up anything that might splash on your stove, etc because I’m telling you this stuff does not come off…IT STAINS BIG TIME!  I now have very yellow dishtowels and a yellow ladle,  but the pickles will be worth it when I make pulled pork BBQ this winter! YUMMO!

These make great gifts too!

Technorati Tags: How to make pickles,Million Dollar Pickles
Posted by My Cottage Charm at 12:05 PM

Email ThisBlogThis!Share to TwitterShare to FacebookShare to Pinterest
Labels: DIY, garden, gifts, how to, Recipes and kitchen tips, summer

On the 4th of July I made 16 quarts of Bread and Butter Pickles with my 2 grown daughters. It was alot of fun and they are yummy!!!

There is nothing like homemade pickles. Yours look wonderful. They DO make great gifts, too- xo Diana

Wow Missy these sound really good. I've never canned anything, but I'd love to learn. My mom did it but she was better at jams using the parafin. Any time she tried other stuff it wouldn't pop or it blew up all over.

Wow Missy these sound really good. I've never canned anything, but I'd love to learn. My mom did it but she was better at jams using the parafin. Any time she tried other stuff it wouldn't pop or it blew up all over.

I LOVE pickles and yours look delicious. The red gingham lids are just adorable.

found you from your nomination at "Dorothy sue and millie b's too" blog. these look yummy! if you need any taste tester's I'm available!