As of February 4th, I have been blogging for THREE years! 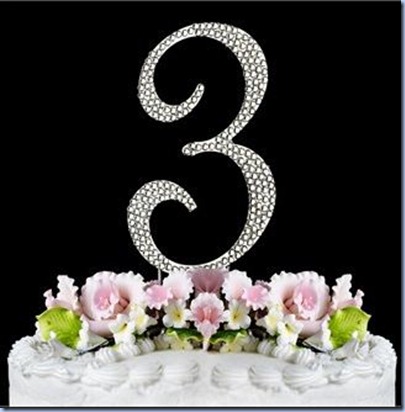 In some aspects, it doesn’t seem possible it could be three years since I started this blog, but as far as friends go, I feel like I’ve known some of you forever!! (and that would be forever in a good way!)

I’d like to take this opportunity to thank each and every one of you who takes the time out to read what I have to do say, to see what project I’m doing, or to stop and pray for my family when “not so great” things are going on.  I can’t begin to tell you how much you mean to me.  You are SO special!

Since I’m on here, I thought I’d give you all a little update about my hubby’s surgery.  He had back surgery on Jan 22nd….it’s called anterior discectomy and fusion.  They basically made an incision about three inches long, on the front ride side of his neck.  They went in, through the neck, and pretty much took out the herniated disc, put in a bone and connected the two vertebrae together with a plate and screws.  We never dreamed it would be as difficult a recovery as it’s been, but praise God, he’s doing so much better now.  He had a terrible time swallowing, and would get choked on just about everything he ate…he even got strangled on his own saliva, but he’s not doing that as much now.  He is getting stronger everyday, and I want to thank you all for your wonderful positive energy, thoughts and prayers……..it has all been such a blessing!  I take him back to the doctor on February, 25th and hopefully they will say everything is perfect and he can go back to work. (although I have thoroughly enjoyed having him home with me!)    We will be having our 28th anniversary on Valentines day, and it will be nice having him home then!  Hopefully he’ll feel like getting out of the house for a nice dinner, but I don’t think there will be any dancing! lol  (not like we ever go when we are healthy either! ha!)

Just wanted to share what’s going on around here, and again, say thank you for reading my blog, and being my friend! I love you guys!

I will continue to pray for you hubbie! I pray that he continues to have a speedy recovery.

Congratulations on the three years and your upcoming anniversary! And wishing your husband a quick and complete recovery!

Happy 3 year anniversary!!! Can you believe how fast time is going, oh my gosh. And, whoa, that sounds like a really intense surgery your husband went through... ehhhhhh... I'm so glad you guys are on the other side of it, and he is feeling better and better each day. PHew!!!!...

Time marches on!! You've given me lots and lots of inspiration. Thanks for all the ideas. Congratulations on the years you've been blogging. Surgery does take a lot of recovery time...more than most people realize. Have a good week!♥♫

Happy Blogversary, my friend! So glad to hear your hubby is doing better...he had a rough time of it!

I have been following you at LEAST a year of those 3....maybe longer....and you are just as wonderful as you think we are!

I am so happy to hear that your hubby made it through the surgery, but am sorry that he is having trouble swallowing. I HATE when I get choked on my own saliva and feel like I'm going to die from it! I can only imagine how much worse it has to be for him having had surgery. I'm sure God will bless him with more strength each day, but do you think eating out on Valentines Day would really be such a great idea? Maybe some take out and eat in your gorgeous dining room under candlelight!

Congratulations on 28 years of marriage. That's quite an accomplishment!

Oh, how did you do in the DIY contest?

I just wanted to tell you that I am always inspired by your projects! I am loving your kitchen makeover and getting ideas for making some changes in mine!

Glad to hear your husband is better now!

Happy 3rd Bloggiversary, Missy!!! I look forward to many more years! I love your blog (and all your gorgeous makeovers)!

I'm also very happy to hear your hubby is beginning to feel better..

Happy Blogiversary Missy! It goes by fast, doesn't it?
happy to hear things are going better with tj I hope his recovery continues on speedily!
happy (early) anniversary!

Missy,
I wish your husband a speedy and complete recovery. Next year on your anniversary I plan on reading a post on how you both danced the night away! :)
I've been reading your words and applauding your projects since you started blogging. I look forward to reading many more.
Love,
Deborah
FairfieldHouseNJ.com