Hi everyone!  I thought you all might like see what I’ve done on my window seat so far.

Here’s where I started…..a very formal dining room.  Don’t get me wrong, it’s okay, but I’m kinda tired of it being so formal.  Can’t you just see a nice long window seat in front of the three windows there on the end? I can’t wait to snuggle up and look through my favorite magazines while curled up there! :0)  (or even better…reading books with my kiddo!) 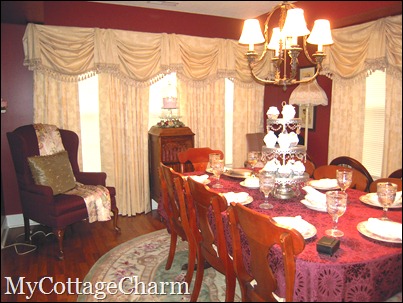 The first thing I did was to take down the curtains and move out the furniture on that end.  Then I put together the Billy bookcases I got from IKEA and set them in place.  Don’t you just LOVE the glass doors? I’m in love! (yes, I’m already trying to see how things will look all decorated…did you expect any less from me?!) :0) 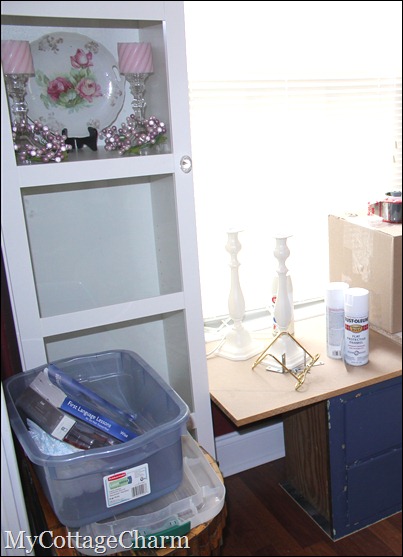 I measured and marked the center of the window, then the center of the set of old drawers and lined up the marks so they would be centered under the window. I wanted to get an idea of where everything would sit when I put it all in. Here’s a first look where everything will end up sitting….(and yes, I know there are gaping holes on each side of the drawers..trust me, I’ll fix that, this is just for placement purposes) :0) 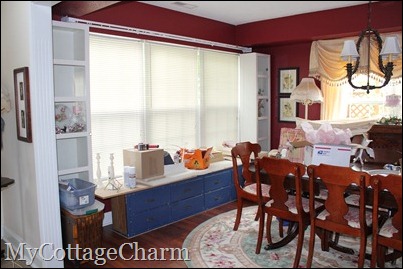 The drawers weren’t deep enough to set completely against the wall and make them the depth I wanted, I just pulled them out where I wanted them to sit, which was about about 8” from the wall.  It’ll be ok because the top will be screwed down to the fronts of the drawers and into the ledger I installed on the wall.

Here’s how I built the ledger.…… 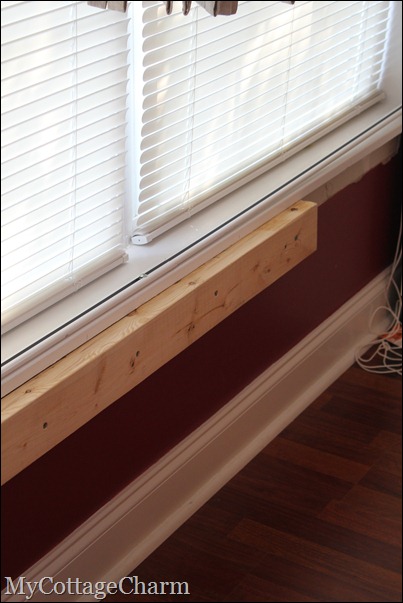 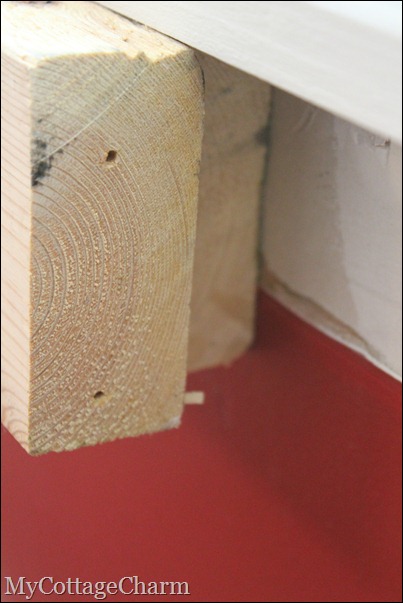 Here’s a piece of scrap wood that shows how the top of the  window seat will sit on the ledger board.  See how far out the drawers come away from the wall…you can see that you don’t have to have the exact depth of a window seat to make a piece work….just pull it out and put in a ledger board.  You could just as easily use the short kitchen cabinets that go over your fridge…but you’d probably have to throw some 2 x 4’s together to build a base for a little extra height. 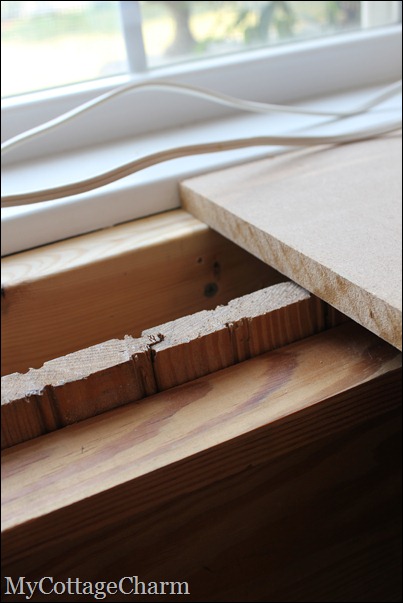 Well, that’s all I have today!  I’ll try to get some more done on in it in the next week or so…I’ve had this crazy congestion and fever for a few days now and I’m hoping it’ll be gone soon so I can get something done around here!  It probably has something to do with 5” of snow about a week ago and now it’s almost 80…we have some really CRAZY weather here in KY!   This is NOT normal for March! (but I’d be enjoying it if I weren’t sitting in bed sick!)

Ya’ll have a great day!

Technorati Tags: how to build a window seat,how to install a ledger board,what to do with old drawers,dining room makeover
Posted by My Cottage Charm at 2:07 PM

This is going to be such a great addition to your house, Missy! Now go rest! XO

There you go with the power tools again! This is going to be great, can't wait to see the whole thing come together!

Ok, there you go again! I can't believe the stuff that you are able to do! This is going to look great Missy! I agree about opening up those windows and making it brighter and less formal. Can't wait to see the end result and I hope you are feeling better soon!~Hugs, Patti

Missie, your window seat turned out beautifully! Is Ky going to win tonight?

I LOVE it already!!! I can hardly wait to see the finished dining room!!! You are so clever!

I hope you get well soon!!!! (antibiotics)

Get healed and let us see more. You are so amazIng! Crazy hot here, too. The snow just melted and now 70-80 degrees. Tomorrow is no school, so perhaps I'll get to work outside.♥♫

I'm so excited for you! This is going to be fabulous!
sorry you're sick. Hope all is better real soon!
gail

I've always wanted a window seat for my daughter's room. So glad you will have one soon! Hope you feel better. I was in KY. visiting family last week and yes the weather was beautiful! Take care!

Your window seat and book shelves are turning out great! Your dining room was beautiful before but taking down the heavy drapery and adding the white pieces really opens up the room.
I hope you are feeling better soon. I've been sick for the past week as well and have not been able to look at a computer screen. We've had a very mild winter in NJ.