Non-flaming candles and how to make em'! :)

Okay, we all love candles. The flicker, the ambience the way they make us feel, it's all so soothing and mesmerizing. 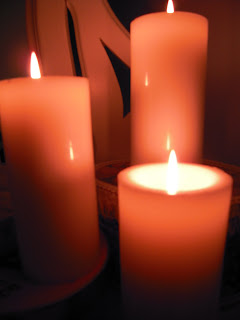 However, sometimes we'd like to use candles in places where flames aren't exactly safe, but I've come up with a way to replicate the non-flaming (or sometimes called flameless) candles you see in all the stores right now for very little money and it's SUPER easy!

I bought a bunch of pillar candles from the dollar store because I found they burn down in the middle and leave a nice 1/4" to 1/2" wall around the sides after they've burned. (you can experiment with candles you like to find one that leaves a nice wall too) I burned them for a few hours to make a nice DEEP well in the middle. I kept pouring the wax out so it wouldn't harden back up. 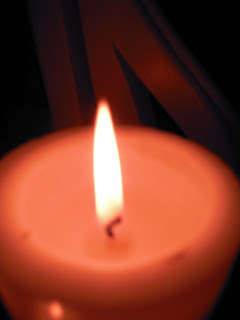 Here it is burning down. :)

After you get the candle burned down nice and deep, you can go to the Dollar Tree, Big Lots or even Walmart and pick up some of these battery operated tea lites. :) The Dollar Tree has two in a pack for a $1.00. (just love that store!) 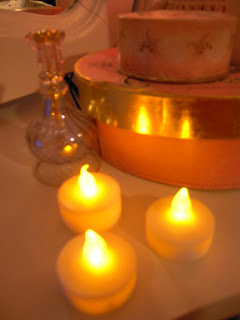 You're probably getting the idea by now, but I have to finish this blog post, so bear with me. :)

After you get the candle burned down deep enough to hold the tea lites without the fake flame showing out of the top, you're done! Just turn the tea lites on and place down inside the well of the candle. .....like this! 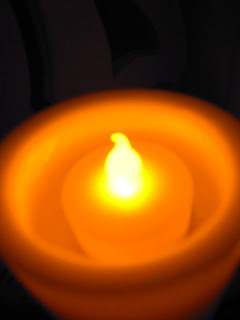 Tada! You have non-flaming candles that look like this all for about 2 bucks! :) And if you already have candles, then it's even cheaper! 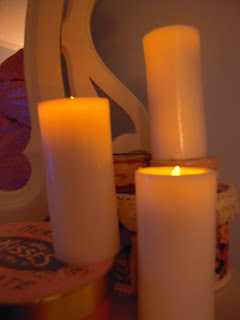 I swear they look just like the real thing....but much safer!
Now run out and get some supplies to make your own! :-)
I'm joining Make it Mondays at Cottage Instincts!
and A Soft Place to land
Posted by My Cottage Charm at 12:01 AM

Email ThisBlogThis!Share to TwitterShare to FacebookShare to Pinterest
Labels: crafts, decorating, DIY, how to, make-over

Neat idea...I will give it a try...I luv candles and have a boatload of them thru out my home! Hope you have a FUN Monday:)

What a fantastic idea! I'm going to have to try that out.

What a fantastic idea! I've got several candles where the wick is so far down and covered with wax that it won't light anymore so this is a great way to keep them alive!

I have also done the same thing - great minds think alike! I have also purchased the flameless candles and probably will never "light" a candle again - they are just wonderful!!

Awesome idea. I'm going to steal, I mean, borrow, I mean copy your idea. Thanks for sharing.

Super idea! I'm telling my married daughter about this one 'cause she's SOOOO careless with her candles :)

Love your blog background too!
Glad you could Mi4M...

These are GREAT!! A safe alternative too. Thanks for posting it!

This really is a great idea! With three little ones, I have been reticent to have any candles around, but I might just have to dust them off and bring them out again. Thanks!

great idea i have a ton of the flameless ones but they get pricey and they sometimes don't work after you have had themfor a while thanks for the tip will share with my followers on my blog sending you all the credit...suzanne

Gonna have to go to the Dollar Store, I see. Thanks!!

i had to refer back to this post! I love it! I'm going to make them as soon as I have a chance to get to the dollar tree! thanks for being so talented & smart!!! =)

I'm going to have to try this! Pinning it to Pinterest for when I'm ready. Thanks for sharing!